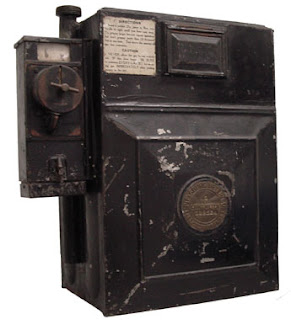 During a meter fit today, the householder, a gentleman who could ‘physically’ be best described as Victorian Dad shared a number of views on the state of the nation, what’s wrong with young people and one of the most fiendishly clever coin meter bypasses I have heard of from the 1950’s / 60’s . The story went that, on one of the Gas mans visits to collect the monies from the meter; he included a new check of looking under the coin slot area for a small hole and rusting. Apparently a number of people had been producing coin size discs of ice and inserting them into the meters, which would enable them to twist the handle for more gas, and then in time (as long as a hole was drilled) the coinage would melt and the general score would be Supplier; Nil – Customer; And Some!

Whilst he told of this devilish 3rd party behaviour that he had never participated in, NO IN FACT during the entire 30 minute meter fit he must have attempted to light his pipe at least 2 dozen times, which after a short while became a total fascination for me. Finally after about half an hour of no ignition I said that I was finished and he put the pipe down.

I can only presume that this was all part of his New Year’s Resolution No Smoking campaign which he was inadvertently enjoying through his wife’s comedy ‘No light’ joke box of matches?