Bear on the Bass?

﻿
﻿
﻿
﻿ Over a number of years in the crazy rock n roll circus business; names are given to artistes that they start to believe, such as The Boss, Grandmaster Flash and Flea. During my time with Cary Grant / Terry Love, The Senators and a variety of fore runners to Kajagoogoo I was christened ‘The Bear’ due to the fact (I like to think) that I was always been able to pick up heavy objects and often shit in the woods. Sometimes though as you get older, you shouldn’t believe your own hype and earlier this week I found out why. On Wednesday I had a small window of opportunity to take a couple of hours out to spring clean my works vehicle. This involved taking stock of the stock, and moving more than a couple of meters, no more than a couple of metres out of my van. Unfortunately, still believing that I am The Bear I ‘made, then heard’ a snap decision as I lifted the entire box of old meters and time switches out of my van and relocated them, along with some important lower back muscles to a painful place.  The upshot of that all is that tonight, after a long hard week I decided to have a long hot bath, but before I could explain this to Steph the phone rang and her sister called, so thinking on my feet I invented the NEW international call sign to someone talking on the phone when you are going to take a bath of a mix-n-match; charades mime breast stroke, along with a big goldfish gulp which loosely mouths “bath.” With a quizzical look on her face I made my way up the stairs for a relaxing soak.  I normally wouldn’t include any products in a bath such as oils or gel however my good friend Peter had recently given me some Seavite, revitalizing organic seaweed bath and shower gel, which claims to be the ultimate seaweed bathing experience from the west coast of Ireland. Some claim indeed! After adding the sea weedy mix, my bath almost instantly turned into excitable real ale with an incredibly frothy head and the slipperiness of a professional banana skin salesman’s banter!  Obviously after jarring my back again just trying to get out of the bath I can now see the errors of my ways in believing anything that anyone tells me!
Posted by Jon at 00:07 2 comments:

I told you so! 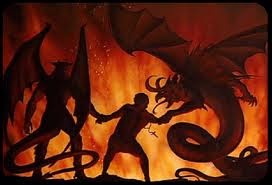 Obviously over the last few weeks I’ve been more annoying with my “I told you so” than the woman who rung the BBC in 1987 to tell Michael Fish that a hoolie of a storm was brewing. Mine relates to having spent the last twenty + years of my life preaching to anyone who would listen, my concerns of one man having total control of all the media, dictating the dynamics, politics and ‘voice of the people’ through virtually all aspects of world news and then claiming that it is an unbiased and free press! So finally, some people have now got it, and seem to be lining up to take pot shots at the Murdoch empire but many will STILL be subscribing to his newspapers and watching his companies ‘pay to view’ the day after!

It doesn’t really need to be said that a successive number of governments (Thatcher, Blair and Cameron) have relied on the Murdoch press for their ultimate success and so have been complicit in a self professing prophecy. How any of them have the nerve to now denounce him and his companies when they have all been part of the whole despicable mess, I really don’t know.

Haircutting, it's a bit like Live Aid to save their bacon

The Treasury this week suggested that we all take a haircut to ensure that Greece doesn’t go into meltdown. Not really sure what the treasury knows about hair care or any associated products but that George Osborn chap always seems reasonably turned out in the barnet department and has done a smashing job steering us through this recession. I mean it’s not as if millions of people have been made redundant and the entire nation has been hit with massive price hikes on everything we buy, is it?


Apparently if this haircut goes well the government may suggest a regular bout of haircutting to save PIIGS in Portugal, Ireland, Italy, Greece and Spain. The word is though, if we have to save the PIIGS then it will mean a full Brazilian and it's really gonna hurt!
Posted by Jon at 09:19 No comments:

While we were away last week, being disrespected by psycho waitresses and Devon Council’s car parking fees we found ourselves at Watermouth Castle and was greeted by this! I wasn’t really sure that it would be my cup of tea until the non- stop selection of Shakin Stevens hits started and I was sold, so before I had time to say “Oh Wo Julie” I had been whisked back to a simpler time when it was acceptable for woman to turn the milk sour with their hugely disproportional hands and highly developed right shoulders! 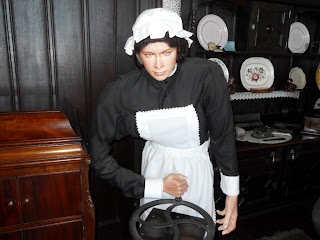 Then we had the onslaught of Victorian one arm bandits, penny shoves and ‘what the butler saw’ machines which left me actually penniless and realising just how tedious Upstairs Downstairs really was. However, in amongst these little beauties I found a machine so clever that all you needed to do was to set one controls to your gender and another to the month of your birth and after a little bit of grinding and a clunk it was able to summarise your entire physical and mental state. 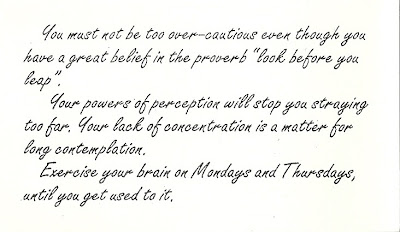 Sometimes after 24 years of marriage on the 11th July all you want is a nice relaxing restaurant like the Sandy Cove Hotel, Coombe Martin, Devon.............. Now read on:-


While we stood at the impressive and informative ‘Wait here to be seated’ sign I scanned the restaurant clientele without success for someone who was young enough not to be sporting a pringle jumper / turkey neck combination. The air was heavy with tales of golfing triumphs and the smell of aquatic things. We watched a slim hipped waiter who bore more than a passing resemblance to a young Jacque Cousteau smiling and flouncing between tables pandering to their every fishy whim, until finally a stern faced waitress came over and asked our room number to which I announced that we were not residence, after a second time she changed her tack and demanded our names. A little flustered I eventually gave up the information but still stressed that she might not find us on her list because we still weren’t residence. A rather icy wind blew tumbleweed over a distant landscape whilst we all waited in silence to see if we were on her list. Finally, as she confirmed that we were non residence Jacque intervened and broke the deadlock and suggested that we move to the bar area to view the two menus (Sea decks & Al la carte) which I can confirm were nicely bound and contained many impressive words. After a while we selected our fare and purchased some drinks and relaxed in their low slung leather sofas until Jacque remembered us and took the order. Quite soon the Nazi waitress appeared again and placed out starters on the low coffee table in front of us, but before she could goose step off and leave us with the dilemma of inventing a new yoga position for dining off of a foot high table and fashioning eating utensils out of old beer mats I blurted out “Are we eating here” Jacque, who I imagine may have been delivering a tasty Dover Sole to a woman who’s age and golfing handicap couldn’t be less than 104 immediately sensed trouble brewing and made his excuses and flounced over to reluctantly show us to one of the many empty tables in the dining room. Finally our unreasonable demands were met and we sat down to a table and chair of normal proportions with real knives and forks and got to ponder these strange Devonshire ways. The starters were very good however when the main meals arrived I foolishly asked a second Neo-Nazi waitress for some more drinks which she was immediately able to advise me in a no nonsense sort of way, was in fact the job of Brian the barman and should she see him in the near future she would advise him that we might want serving.

By this point I really wish someone had confirmed the rules of engagement, and explained that despite going out of their way to state that the Sandy Cove restaurant is open to non residents should you be one of those unfortunates then basically; Service, furniture and utensils are ALL extra at cost BUT ONLY IF we can really be arsed!

Our mains arrived but as we started to tuck in Steph noticed that the chef had unfortunately plated up amongst the salad, a small 6” piece of tarmac from the edge of the car park instead of the beef lasagne that had been ordered. Jacque was summoned, who immediately rolled his eyes as we spoke of our high expectations of edible food and countered with ‘there is no sauce within the dish’ so (presumably) it should be dry and hard enough to park a car on? Steph decided to go down the safe option of the steak and have the same as me which we then ate in shifts. Me early, her late!

When the SS waitress asked if we would like to look at the dessert menu we thought it best to cut our losses and we said “thanks but we had seen one before” so we got the bill which (to be fair) contained neither Steph’s car park Lasgne or the steak.

All in all, not quite the evening we had expected.
Posted by Jon at 14:16 2 comments: