I have been off this week doing a number of undercover and over cover projects. The undercover (by the very nature of the title) will have to remain secretive at present, but may (lets say) fall loosely into the category of Art and Design and shall be mentioned at appropriate times in the future. The over cover project has been to replace the fascia to my Mum and Dad’s bungalow, that has been ravaged by time (a little bit) but mostly to stop the’ knock, knock, point’ of passing fascia and barge board salesmen that hang around Leighton Buzzard dealing their over cladding services OR predicting a doom laden future for people too stupid to take up their highly discounted easy payment schemes. So the plan was to circumnavigated these scammers and avoided the national DIY (stack em high, sell em expensive) outlets and purchase the products from a local, open to the public, trade supplier which worked out very reasonably indeed. In fact it all went swimmingly well until rain stopped play on Tuesday afternoon and then again on Wednesday, before I got the guttering back up. 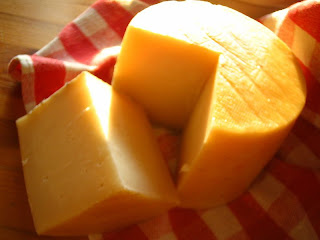 Of course I do these things because I love my parents dearly, but really it’s due to the little pearls of wisdom that would be lost to overpaid contractors if I didn’t. Here is one such fact that was imparted over a cup of tea and a cheese Bap. When my mum was growing up the man next door used to wash both his feet and socks at the same time in a bucket in front of the fire. I’m sure I do not need point out that this was many years ago in more austere and less privileged times and to drip dry your socks in front of an open fire was all the rage, and the idea of putting your socks in the microwave to dry like we do these days would have been regarded as witchcraft. The other thing about visiting my parents is, as practising Herbivorous (they like to call themselves the more socially acceptable Vegetarian Freaks) that their total reliance on cheese and cheese based products is virtually like religious fanaticism. On Monday I had a cheese roll and then on Tuesday it was cheese with a little bit of onion. Wednesday, however they started playing some mind games and mixing it up by serving up one small cheese roll with Branston and the other without. I am absolutely sure that somewhere in a previous life they must have been Mr & Mrs Smorgasbord who started the cheese Moonies.

I, Sweary Pat and others donned two toned shoes to skip the light fandango on Friday night to bowl again at the Enormo dome. The trouble all started when the barren status of the Guinness pump first hit Pat and the realisation that the bowling bar staff’s resolution to this calamity was to advise us to walk some 100 yards or so to the First Base bar and then return to the bowling with his favourite tipple. Pat would be best described as quite Irish, and little bit sweary! Don’t get me wrong he knows when NOT to swear, I’m guessing he would do really well when He’s sleeping or under anaesthetic, dead, etc. Anyhow, after much discussion and due to our stout inconvenience, he has now received a number of free bowling tickets. Unfortunately for City Limits or to give it its correct title; Spirit Pub Company I am reasonably sure that this is not the last that they have heard of this.
Posted by Jon at 20:13 1 comment:

I have flame proof trousers. These are trousers that can contain both internal and external explosions of a fiery kind. Some claim, I am sure you will agree. I also have a similar equipped jacket with some Hi Viz panelling on the back, and also a Dale Farm full face visor that is terribly P.C. but a little dented!


Anyway, whilst wearing this stuff yesterday (except the visor for religious reasons) at a local cash point at Tinkers Bridge I was approached by two women and an inquisitive husky who smelt me up and down. Not the women, just the Husky.

She winked and then said “I’m sure you are honey”

Just recently I have fallen into the ways of a single man, due to Steph having taken a job of care in the community. This generally means that she starts early and finishes late and sometimes even has weekends during the week. Add to this mix, my on-calls which run from the time I finish in the afternoon until 8 o clock the following morning and you have a recipe for some irregular mealtimes, bedtimes and bowel movements! In the words of Bill Nelson and Be Bop Deluxe we are currently like ships in the night, crossing paths for a brief moment and really wondering about the nutritional value of pot noodles *


Unexpectantly this has also had a small upshot to some additional ME time, where I have done a little bit of recording on my all new( 80’s) portastudio and also given some thought to a potential bucket list.

Finish Sea Sick Steve! (I know how wrong that sounds but here is a picture of the canvas last year) It hasn’t moved on much.

Dissclaimer
*I dont think Bill Nelson ever mentioned the value of a pot noodle meal!
** One of the original album titles for the second Cary Grant album by band member, Peter Maurice Kill 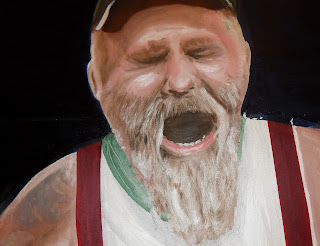 I only ever go to Central Milton Keynes twice a year. Once just before Xmas to buy trinkets and things for loved ones and associates, and then again just after to take stuff back... Oh, and of course should Cliff ever do any more speciality roller skating classes then I would be up there quicker than a robber’s dog! Unfortunately though, I was recently honoured with the CMK shopping centre meter reading job which is about as enticing as lowering your genitalia into an active food mixer or actually being the self opinionated air head that is Alesha Dixon! The real problem with this job is that when you state to any member of sales staff and most managers that you need to see the electric meter you may as well be asking about astrophysics in Swahili due to their pained expression and comments like “I don’t even know where that is” Many enjoyable hours were lost to this pointless and frustrating game this week that will never to be returned to me. Add to this the rather annoying habit that the company has of often only putting the unit number or the name of the holding company in the address to be found and it sometimes feels like trying to find a needle in a very large 1980’s haystack with pay and display car parking. Having spent in excess of 20 minutes in the Disney store with the promo of the all new Lion King I really do now know about the Circle of life. Likewise in the Anne Summers store whilst on another fruitless meter hunt we only managed to find a confused freelance bra fitter from Luton (well that’s what he told us) and what I think must have been some comedy outtakes DVD from Casualty, called Doctor and Nurses in Bonkers 69. Krispy Kreme, well don’t even go there! The only one that was quite uplifting was Bravissimo where we received support in finding the meter by a CMK Security guard in two of the large loading bays. 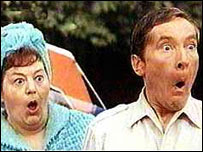 Ok I am making light of it now in a tribute to Carry On sort of way, but when I really had the stuff to sort out it wasn’t too much fun!
Posted by Jon at 13:53 2 comments:

In the name of Art

I have been working intensely in my laboratory this week on a speciality art piece to celebrate Lisa & Phil Gardner’s first wedding anniversary. As discussed before on this very blog, Phil rose to international fame for flogging pictures of his pet cat in the shower to scurrilous newsrooms and paper moguls the world over. Still living high on the hog with a constant stream of royalty cheques amassing in his Swiss bank account and operating from a penthouse apartment close to one of Brighton’s trendiest stockbroker belts and braces charity shops he claims the cat grooming and abuse is all behind him, but.......
Early on knew this would be a difficult build and shoot realising quite soon after getting into MK’s Bowl boot sale last Sunday that a relaxed muscle action man was more difficult to find than rocking horse doo doo (and that had been a right stinker a couple of weeks ago) As luck would have it I did find a fully poseable Retinal Screener Ken action figure and decided to go with that and a very large dose of poetic licence. Once home I was able to remove Screener Kens head with a sympathetic hack saw / chisel and appoint all my time on the finer facial details adding at one point 3 eyes due to an over enthusiastic super glue moment but finally plumping for the more traditional 2 eye and permanent marker eyebrow combination. Due to pressing time constraints and a world shortage of miniature Persian cats I was forced to move into the unchartered territory of Photoshop. Luckily I was able to call on one of the finest Derby & Milton Keynes based exponents of photoshopeee Kirsty Cheshire Photography .Within hours she confirmed that she had enough Photoshop to do the job and soon produced this.

Whilst this art business is mainly about swanning around in smocks with a glass of wine in your hand, there still is some sweat, passion and even disappointment like when the greeting card police came in and confiscated some of the early test shots (like this one) for being too risqué. 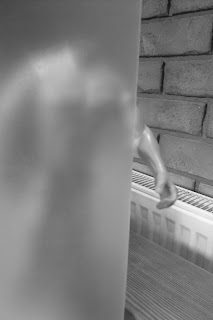