That's too big to be anything I really recognise?

Who says there is no such thing as a free lunch? Kirsty and her flatmate Amie came home on Thursday evening saying that they had had a series of texts from their Derby Uni friend Georgia on their way back to MK, telling how she had  answered the door to a tall dark stranger, who presented her with a large (no... a very large) bag of meat. Whilst she swooned at this lovely gesture, the secret meat millionaire slipped back into the Derby darkness without explanation, leaving Georgia to ponder how wonderful this spontaneous gestures of ‘love’ for her flatmate really was. Unfortunately when her flatmate returned (as I am sure you have already guessed) she knew nothing of the beau, nor any offer of free meat!
The really intriguing thing is that NO-ONE could actually identify the meat, but felt sure that a small piece of chicken skin had been placed on top as a distraction!
The case continues.
Posted by Jon at 20:19 No comments:

When the boat comes in, Rubbish! 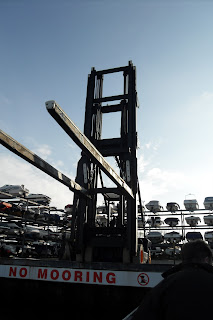 Whoever said that there are plenty more fish in the sea, was both delusional and stupid. After getting up at 5 o clock on a Saturday morning we started out on the 2 ½ hour trek down to Bournemouth. A good run by anyone’s reckoning but still with about one and a half hours too much “Are we there yet” by the bloke who was driving. Although the BBC’ s old seaweed weather predictor had us down for a blowy day with a possible short shower it was generally very nice, and by early afternoon even the sun had got his hat on.
The captain had obtained detailed information off the interweb and held up a small picture of a bloke on a boat with a back drop of sea and stated that this is where we shall go to “It’s a fish magnet.” I personally didn’t recognise that bit of the sea from the picture but he assured us that we couldn’t fail to catch. After a long time and a couple of cups of tea there was one fish caught by our salty old seadog capt’n, which was some sort Bream who we called Jim, but due to the fact it was so small and possibly in danger of being eaten by the bait we had to throw it back before we could obtain a microscope. After these early successes we moved to nearer the boatyard which was (apparently) another hot bed of specimen fish. By this point It had become quite clear to me that the Commons Fishery Policy isn’t working and it is highly likely that those swarthy Spaniards creep into Bournemouth harbour under the cover of darkness and catch the flounder and Bass and then replace them with miniature OCD crabs the size of pesetas. I say this because one of our crew whose name I will not divulge due to his campest of casts, (the likes we had not seen since ‘Priscilla the musical’ had a girl’s night out with Craig Revel Horwood) actually managed to catch about half a dozen of these miniature crabs 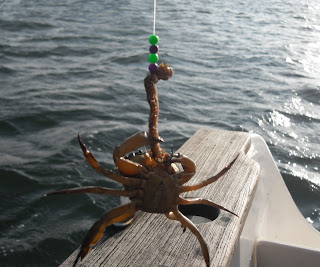 Unfortunately, other than the one micro Bream and a turn up full of dwarf crabs that was about it, but in the great tradition of all good fishing trips we still had enough ‘the one that got away’ stories to fill about 10 minutes for the two and a half hour drive back.
Posted by Jon at 17:32 2 comments: 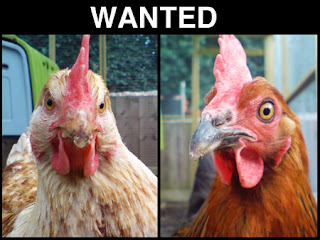 There is a limit to how far I can be pushed, and I believe I may have been very close to it this morning when I was abused by speciality chickens. Yes, whilst on yet another errand of mercy to save people money the world over, by meter / tariff switching I was shown into a garden in the east of the city which could be best described as somewhere between a salvage yard and a mud wrestling pit. Having eventually found the cleanest place to put my tool box I proceeded with a number of electrical checks only to notice the owner’s son slipping and sliding across the garden to a small wooden structure like a reluctant Glastonbury festival toilet cleaner. The next thing I know is the door is flung open and 6 speciality hens shoot out like circus acrobats landing only occasionally feet first. The boy then gets trailed to the shed where He finally emerges with some feed. All hell breaks loose and the lad retires to a safe distance whilst the mosh pit bubbles with feathers and mud. I of course fear nothing except maybe Snakes on a Plane 2, but find myself clocking the large black one as he starts scratching around the garden ever closer. At one stage I found it necessary to go inside to the fuse board and when I got back he was perched on my tool box, with a guilty look on his beak.


Quite simply I do not get paid enough to reduce debt, fight climate change and wrangle chickens in a swamp, and definitely won’t be going back.
Posted by Jon at 21:02 2 comments: