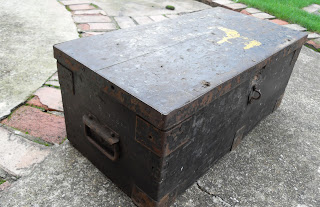 I always wanted a pirates chest (You know, anchor tattoo, hair like coconuts mixed with parrot droppings etc) and as luck would have it couple of months ago I saw this little beaut at a car boot from a house clearance bloke who was making some wild claims that nothing from his stall was more than 50p. So 50p later I was the proud owner of this delightful little black box, which once had been owned by Mr B Binfield of Malta. I knew this because it had been sprayed on the top along with some additional bespoke yellow artwork. 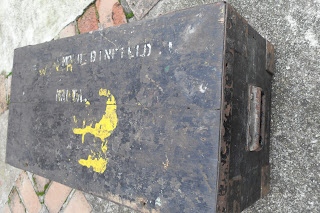 I was convinced that all I needed to do to make my dream come true would be to strip everything off of it, then sand down to the original pine, taking in of course, many years worth of dubious Maltese paint and a car sumps worth of oil from the floor of the box to make it into the finest pirates treasure chest ever, 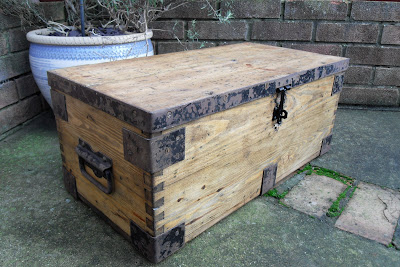 The REAL Miracle of Christmas

Firstly, a couple of weeks ago my cousin Tim, in a knee jerk reaction to my review of his hit channel 5 show Culvert Clearance from June, where I likened him to WW2 moustachioed dictator wrote to complain and explain the word culvert; an enclosed watercourse conduit usually at least 10 times longer in length than its diameter, hence not a bridge Which was both lovely and fascinating. He also suggested that I write the script for Culvert Clearance 2 where he will do all his own stunts, and not have to wear inflatable braces, or water wings .


Then, whilst preparing a live CD for my good blogging friend Phil Gardner of one of his favourite crooners I decided to hold out the sharpened end of the olive branch in an email to my old band mates, who technically own ¼ rights to our back catalogue. In the true spirit of Xmas I was immediately called by Peter ‘Sticks’ Kill who enthused about the project but then asked for an advance on the royalties.

That evening Trent 'Brent' Baker forwarded this missive to us all;-
Dear Bear,

Superb news. I look forward to that. Blimey. There was some rare and truly brilliant material from that Show.
Lovely Moon. Rainbow. A version of Sarah featuring sticks Kill on Megaphone Marina on armchair and newspaper.Truly mental.

All yours in HUGE anticipation.

Then, finally bringing up the rear, after stalling in the traps for some time, Mr Michael J Kitson suggesting a reunion gig / download / Last Waltz push for the band

Dear Bent and Trere and Pete
Yes superb news indeed. I remeber that show well. I was ver ver drunk.
I suggest a reunion now that we are all nearly 50 and before our prostates get too big.
Love you guys

On the back of all this goodwill I have since visited Trent and Jane just prior to Christmas and wished them season greetings. Had an very funny email discussing the downfall of Joe Walsh (No, not the one from the Eagles) from the boy Kitson AND have been promised unlimited roadie and sound engineer support should the next Cary Grant tour include Brighton by the multitasking Phil Gardner.


Now that (Ladies and Gentlemen) is the true miracle of Christmas!

I have fell out of favour with blogging just recently due to an overwhelming number of extraneous projects and the deep dark depression that tends to gather all around me like an ill fitting three armed Christmas jumper at this time of year, along with the associated cost hangover that will be a banging headache felt well into 2012. Yes technically, I am the Grinch throughout all the festive season, only taking time off during the brief few days between boxing day and New Year’s Eve when I am then hit by an all time low, facing up to the realisation that whilst my life is not too bad, the previous year has in many ways just replicated the one before!


Having said all that, more than one of the extraneous projects have now come to fruition and I can reveal one of the fruits of my labour for Pete’s 50th birthday treat;- 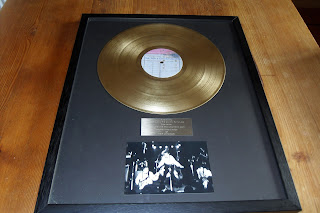 As I am sure that many people who have a downstairs loo will confirm that apart from a Glade ‘Touch – n-fresh air freshener, a gold album is their number two’s all time favourite wall hanging. Although I don’t believe that this has actually been hung yet in his new mock Georgian three toilet house, I am fairly confident that this gold disc will bring its owner and many house visitors some light relief in difficult times to come.
Posted by Jon at 23:31 2 comments: