This morning started with a bang. Well, two to be precise. Yes with Christmas and the New Year now weighing heavy on my bank manager’s nether regions and making him a bit grumpy, and my new 2012 sock collection already over shadowed by the number of cheque stubs, the great God of electrical appliances, Saint Euronics looked down upon us and frowned twice this morning.


Firstly our extensively used dish washer, which I believe to be one of the greatest inventions known to man since Fairy washing up liquid and Nanette Newman, gave up the ghost and ground to a halt. Four rounds of washing and drying up later I finally managed to hang up my tea towel, and bravely move on to a little light ironing. Two thirds of the way though this and having completed only the right side of a favourite shirt there was a loud click and all the power went off. Having spoken badly about 2011 unfortunately I found it necessary to question 2012’s parentage as well.

Knowing a little bit about the workings of a modern electrical supply and fusing I deduced that the Iron had just committed hari kari and threw out the RCD in the fuse board. Of course I should have questioned whether Breville (who manufactured the iron) really knew what they were doing in the first place. I mean, to make a sandwich toaster is one thing but an iron where the key ingredients are electricity and water..... well, need I say more. It’s horses for courses and know your limits isn’t it. You wouldn’t ask the Germans to run a comedy club or the French to make breast implants so it stands to reason that the mechanics of compressing a couple of bits of bread and lightly warming them through against harnessing 240 volts in a metal shell with added water and steam is a totally different ball game and should be left to the professionals. 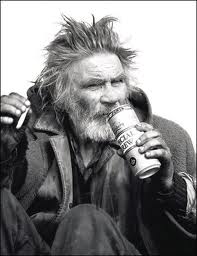 So unfortunately by mid morning I was in the doldrums and pretty pissed off with my lot, only able to look forward to negotiating access through our neighbour’s 'jungle' garden to fix the fence that had been recently blown out by recent inclement weather conditions.
So to sum up;-
As long as I don’t ever need to go out in any clothes that have been ironed again and only eat food directly from the packaging, thus negating the need for any cutlery and plates and washing up I believe everything should be ok. Other than that it’s the Shabby Chic look for me along with lemon fresh leathery hands!
Posted by Jon at 23:25